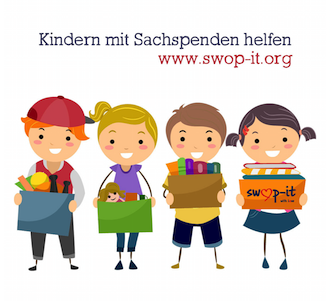 Many children in our society do not have it so good. This is especially so for the 2.6 million children in Germany aged 16 and under who live in poverty - and their number is increasing daily. This means about 20 per cent of all young people under 18.

Over the past two years, swop-it has set up the first Germany-wide, IT-based charity platform aimed at giving the necessary support to children living below the poverty level. It’s help that arrives directly.

swop-it collects from throughout the country children’s articles which are in good condition (clothes, books, toys, sports equipment etc.) which are then distributed under a fixed system directly to needy families and charitable organizations. Other donated articles are sold by swop-it at very reasonable conditions via an online shop operating under the slogan "Favorite Things At Favorable Prices“. The offer is open to all-comers. The proceeds - once operating costs are deducted - then flow back into charitable works - e.g. swop-it-financed children’s sport camps run by specially chosen partners, or visits to doctors, or helping parents by paying for urgently-needed sport clubs, meals etc.

A special feature set up by swop-it is its direct donation platform: Needy users can fill out a list online of what they urgently require. The list can contain four products (e.g. trousers, pullover, T-shirt, scooter) shown for sale in the swop-it online shop. Willing donors can then step in to buy one or more of the products, which swop-it then sends directly to the needy family. The want lists are designated by region, enabling donors to determine the town or region where their donations end up.

What makes swop-it operate so effectively?

- People from many social levels share the same network.
- Support for needy families and children arrives directly, with no detours.
- It’s environmentally friendly.
- The direct donation tool means donations can be directed locally and accountably.
- Shop proceeds flow exclusively into charitable projects.
- The direct donation tool means every donor decides the region where he or she would like to help.
- swop-it is a guaranteed charitable operation.
- Health, education and sport are promoted. Equal opportunity is improved.

swop-it honor: In 2015 swop-it became an EU promotion project, based on its charitable and progressive approach to creating Germany-wide networking of the various levels of society.