VfB gives it all! 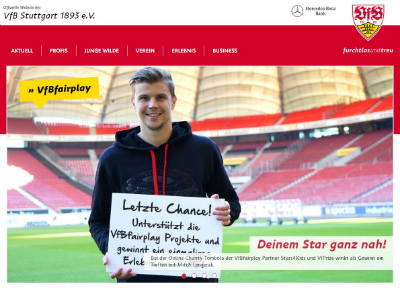 The online charity tombola run by VfB Stuttgart partners Stars4Kids and VIPrize is offering a top prize of a meeting with goalkeeper Mitch Langerak.

The Australian keeper sets much store by social involvement, as he recently stressed in a portrait piece in the club’s "stadion aktuell" magazine. So he didn’t think twice about giving his backing to the new online charity tombola being launched jointly with VfBfairplay partners Stars4Kids and VIPrize.

He’s at the centre of the following campaign: The tombola top prize winner will get to see VfB’s home match against 1.FC Union Berlin on Monday 24 April (kickoff 20:15) in the VIP area, and then meet the goalkeeper, have a picture taken with him and be presented with his jersey. It’s a top prize that couldn’t take you closer to all the action - and anyone can take part in the tombola draw with even a small donation.

Taking part is not just about all that, though. The donation of every participant will help disadvantaged footballers, for whose benefit the campaign is principally run. The Stuttgart club's VfBfairplay has been campaigning since 2014 for equitable social participation for the handicapped in sport.