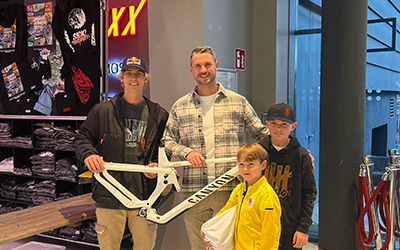 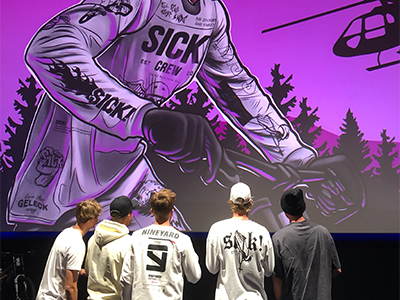 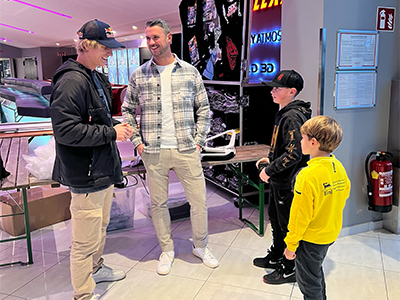 A little dream came true for Matthias and his two nephews! They met the Austrian YouTube star, extreme athlete and mountain biker Fabio Wibmer in Salzburg. And exclusively before all other guests. But let's start from the beginning:

Matthias had participated in the raffle, with a donation in favor of the Wings for Life Foundation and was invited as a lucky winner to the release event of the new YouTube video "Video Game". He was allowed to take his two nephews, both also big Fabio fans, with him. So the three met Fabio Wibmer at an exclusive Meet & Greet in Salzburg! The boys were quite nervous and couldn't get a word out in anticipation! They brought their helmet and other fan items for signing to take home a little souvenir! They also took a few souvenir photos. But the highlight was the handover of the original signed Canyon Strive frame in Fabio signature livery, which was part of the main prize. Whether Matthias keeps the frame himself or passes it on to his nephew, he did not know yet - but it will definitely be used! That's for sure!

After the Meet & Greet and a little refreshment, we went back to the Cineplexx in Salzburg. There Matthias and his nephews were allowed to watch the behind-the-scenes documentary "Danger Zone" on the big screen. Before the screening, there was a Q&A with Fabio and behind-the-scenes insights into the spectacular video shoot. They sat between the crew in the second row and could therefore follow the whole performance in the best possible way.

After the exciting day, everyone went back to the hotel. Conclusion of the evening: Winner Matthias and his nephews, who normally only see Fabio Wibmer in his YouTube videos, were finally able to meet him live! Fabio is a super likeable and relaxed guy and everyone was happy all around!