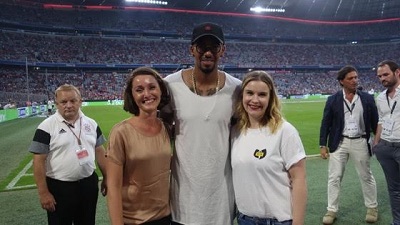 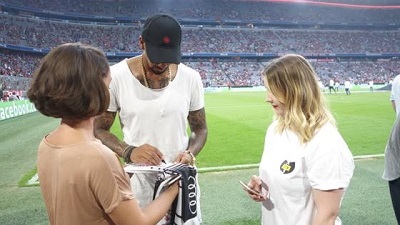 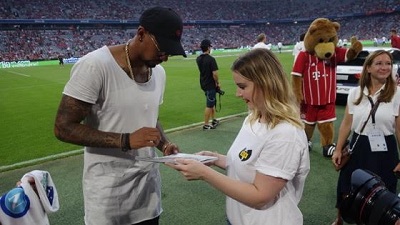 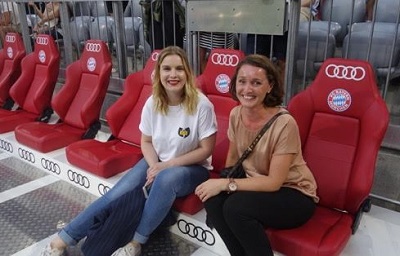 Together with a friend and 2 VIP tickets for the Audi Cup Final 2017 in the Allianz Arena, they started their journey to the beautiful city of Munich in the early morning. The accomodation and arrival had already been organized, this was of course included in Noras main prize!

With full anticipation, the two finally arrived at the beautiful and modern stadium of FC Bayern, where they were friendly greeted by some employees. In the VIP area they had lunch with a fantastic view of the field!

Afterwards it was finally time to meet their idol! Jerome was already waiting for them on the sidelines and greeted them with a big hug ... a goosebump moment for Nora! After a first small-talk they took a bunch of selfies and of course they got signed autographs on their merchandise articles.

The Bayern star even had a surprise for the two fans. Due to injury, Bayern's defender had to take a break at the Audi Cup so he could spend more time with the two. Nora and Co. got an exclusive stadium tour behind the scenes personally by Jerome ... Wow!

They walked for example through the player tunnel, the interview zone, they were allowed to sit on the club bosses‘ stadium seats and even got the opportunity to look into the dressing room, where they could see many more Bayern stars!

The donations of Nora and all other participants went to the FC Bayern Hilfe e.V., which has the goal of helping innocent people in need. The promotion of education and training, youth and elderly help and sport has also a big focus here!

Thank you very much Nora for your great support for a good cause!