A footballers´ foundation that helps children 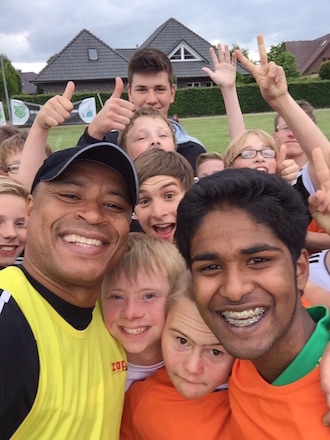 Creating a better future for children with the help of footballers, sportsmen and women, and stars

The STARS4KIDS foundation is an international aid organization based in Germany’s Baden-Württemberg federal state. It operates many projects across a number of countries helping children and teenagers in socially deprived areas, as well as giving direct aid to children in regions of the world hit by hunger.

Many thousands of Euros are raised from football benefit matches involving top German Bundesliga teams, auctions, training camps, autograph sessions, tombolas and other events, and the money is used locally for building and maintaining schools, orphanages, workshops, nutrition projects and hospitals. Thousands of children receive food, clothing and education aid, opening up prospects for a better future. The foundation’s governing board convinces itself about every project it supports, and ensures that the money directly reaches those in need.

The foundation currently supports twelve projects in Germany, three in Brazil, two each in Ethiopia, South Africa and the Philippines, and one children’s project each in Kenya and Haiti. The foundation is backed mainly by football celebrities - players, coaches, officials and former professionals. There’s further help from other sports people such as basketball and handball players and track and field athletes, plus musicians and film and television stars.