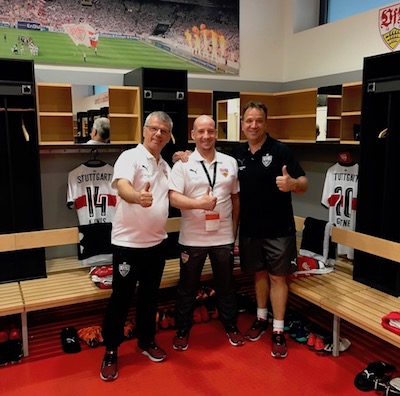 Steffen and his wife in the VIP Lounge 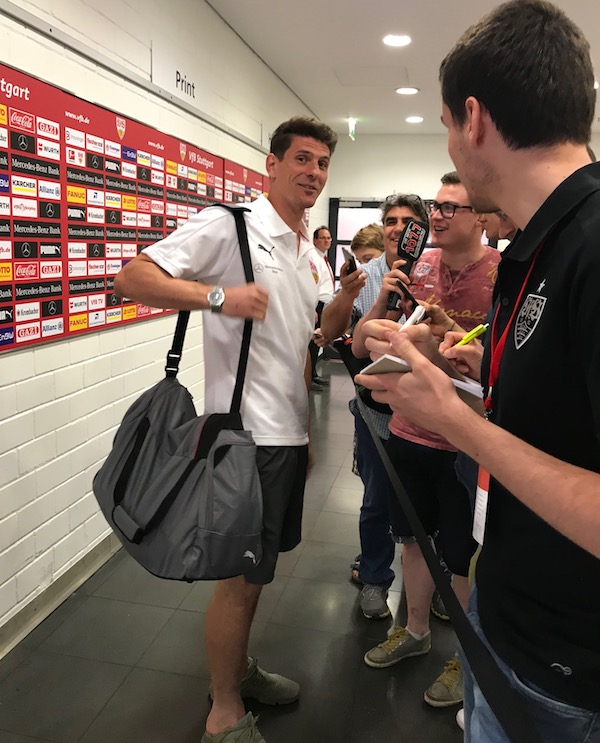 When VIPrize-winner Steffen arrived at the office on the home match day of VfB Stuttgart against SV Werder Bremen was still a picturesque silence around the Mercedes street in Stuttgart.

A short time later, the managers of VfB arrived and made a small tour of the premises with Steffen and showed him the history and the trophies of the club.

Next they went to the catacombs where Steffen met for the first time kit manager Michael Meusch and his colleagues. After a warm welcome and a quick change of clothes, in a perfectly fitting VfB tracksuit, it was right down to business. With a fully loaded van, Steffen went with Meuschi and Co. from the office on direct route to the stadium. Once there, unloading the many large and small boxes began with all the player utensils in the cabin.

After a short introduction, Steffen began to prepare the utensils of the boxes after a precise plan and under the scrutiny of Meuschi for the 18er squad. Starting with the jerseys at the players' fixed seats, the underwear and socks, to the many different shoes. Impressively, Meuschi had all the sizes, peculiarities and preferences of the individual professionals in mind and could immediately say who, when, what wears or wants to have. Later, the two repaired a pair of football shoes with new studs.

After 2 hours of very perfectionist work, the player's cabin was ready!

Next, Meuschi led the lucky winner Steffen through the various areas of the stadium with the mixed zone or the press room. A few photos on the lawn and a short chat with the greenkeepers followed.

After a cup of coffee, Steffen received his 2 VIP tickets for the afternoon and said goodbye to the kit manager Meuschi and his colleagues. Together with his wife, they went to the VIP Lounge where they ate delicious food, before they went to the match against SV Werder Bremen.

"After what I saw and experienced in the morning, I can only express my appreciation for the work of the entire team behind the event and thank you for the warm welcome and the super friendly people who made this day an unforgettable experience for me. At the end of a great day i drove back home with many beautiful memories"- VIPrize winner Steffen K.

The donations from Steffen and all participants went to the VfBfairplay Foundation, which aims to provide regular football promotion to people with disabilities. They should find easier their way into the local clubs and be supported in this way.

Thank you Steffen for the great support for the good cause.