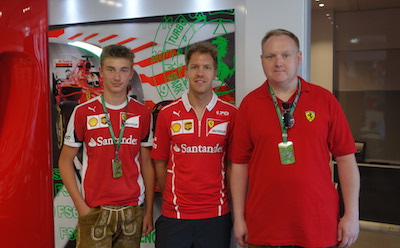 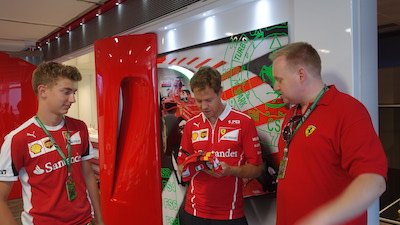 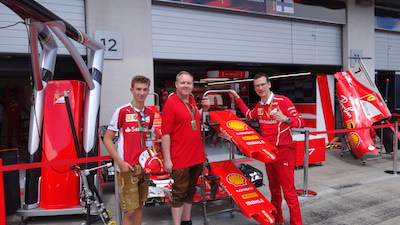 Markus, our lucky VIPrize-winner in the campaign benefitting the Funk Kinderhaus, has duly received his top prize at the Austrian Grand Prix in Spielberg. Markus and his companion spent a full four days in Spielberg - an experience he says he will never forget!

After arriving in Spielberg on Thursday, the two winners headed straight to the circuit. And no sooner had they arrived than they had a personal welcome from Sebastian Vettel who, in typical open, cordial and extremely agreeable manner, gave them an exclusive tour of his Ferrari motor home. This is where the several-time world champion relaxes before races, gathers strength and concentration before going out onto tracks worldwide. "It’s a crazy feeling getting to experience all this close up,“ said Markus. The exclusive tour was promptly followed by another through the Ferrari garage. Here, the two had another close-up encounter, this time with Sebastian’s Ferrari which was fully explained to them as the first race tests were already in full swing.

The entire Friday and Saturday then saw the winning duo get full access to the training sessions. In qualifying, Sebastian reached second grid spot - supported trackside by the two visitors with constant crossed fingers.

At last, Sunday - and with VIP tickets still in their pockets, Markus and his companion were again trackside to witness the race direct and close-up. "This was an unforgettable experience, and I'd never have thought Sebastian would give us a personal tour of his motor home so close before the race,“ said Markus. We, too, were delighted at such enthusiasm, and hope to bring about many more such experiences.

There was just as much enthusiasm from those who truly profited from the campaign. The contributions which it generated go towards supporting the Funk Kinderhaus, which enables mentally- or physically-abused children to grow up in a protected and loving environment. The aim of this children’s home is to give each child a fair chance of a secure and happy future. Donating, therefore, is truly worthwhile - for all concerned! A big thank you, then, from your VIPrize team, too - and hoping to see you soon.