An unforgettable experience with the VfB Stuttgart 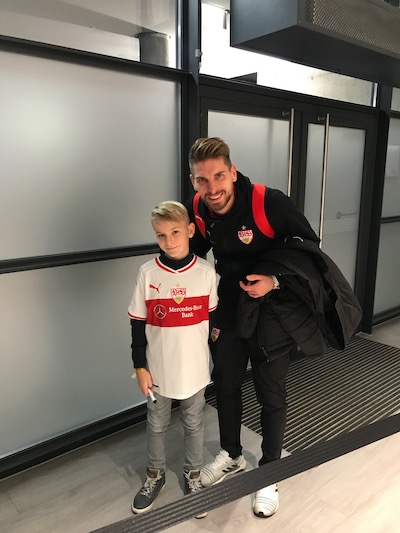 Tom with his idol Ron-Robert Zieler! 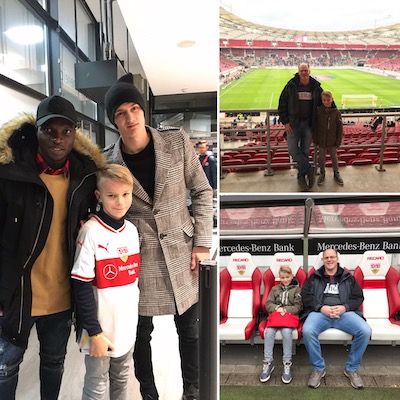 An unforgettable day with the VfB Stuttgart

Seeing a soccer match of VfB Stuttgart and getting to know all players personally?

For our winner Sven and his son Tom this dream came true.

Thanks to their great support for the VfBfairplay, they went to Stuttgart to the Mercedes Benz Arena - equipped with 2 VIP tickets - on 19 January to watch the match VfB Stuttgart vs 1. FSV Mainz 05!

But before the game started, an exclusive stadium tour was prepared for Sven and Tom: Here, the two were able to enter the pitch through the players tunnel like the real stars, take a seat on the coaching bench, visit the press room and sit on the chairs in here.
In addition, the two saw the dressing room of VfB Stuttgart, where all the jerseys, shoes and socks of the players were already prepared by Michael Meusch. Michael explained the two winners what a home game day looks like and what he has to do.

In the VIP Lounge there was a delicious refreshment with drinks and food before the game finally started, which our lucky winners could enjoy with a great view!

In addition, Sven and Tom were brought into the mixed zone after the game, where the players gave interviews: Here they met their football stars personally! Tom had brought his VfB jersey which of course all the players liked to sign.

We say thank you to Sven for your engagement. With your donation for aid projects of VfBfairplay you have put a great sign!